What are the instructions of Honeycomb Machine ? 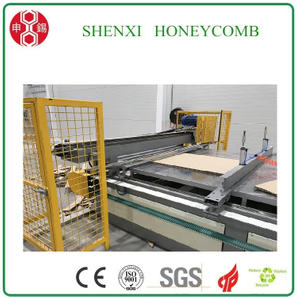 The following knowledge points are listed below:

1.The technology strategy for honeycomb machine

The honeycomb paperboard production line uses the technology of shaft-less hydraulic support to lay paper, so that the paper on the roll and the paper on the roll are more convenient, more flexible adjustment, can effectively control the tension of the paper.So for the honeycomb paper delivery process can appear more stable phenomenon, and then the production of honeycomb cardboard leveling force is also very prominent.

Honeycomb paperboard production line used to optimize the production process of plate-making, in the process of plate-making, to save the heating drying this link, but absolutely can only deal with the moisture content of the content of 12% up and down.And the progress of this technology, has achieved the huge advantage of saving energy, reducing environmental pollution.

2. Buffering and vibration isolation of honeycomb

Excellent buffering and vibration isolation function of honeycomb. Honeycomb board for the core structure, with excellent buffering and vibration isolation function, close to EPS. Good heat insulation and sound insulation. The honeycomb hole of the honeycomb core is a closed structure, which is filled with air and circulates through each other. Therefore has the good heat insulation, the sound insulation performance. The strength and stiffness are easy to adjust. The honeycomb paperboard can obtain different strength and stiffness by changing the thickness and weight of the core paper or by changing the diameter of the honeycomb paperboard and the height of the core column.

3. Structure of the honeycomb machine

Honeycomb machine and mold: the nose consists of alloy steel inner sleeve and carbon steel jacket, in a forming die head, is the role of head rotation movement of the honeycomb panel melt into a parallel straight line, are all smooth import die set, and give necessary to honeycomb panel forming pressure, honeycomb panel inside the barrel plasticizing compaction, approved by the porous filter plate along a certain port head neck into the head forming die, die core die set appropriate coordination, the formation of cross section and decreases the annular space, make continuous dense honeycomb panel melt formed around the core tube coated layer.